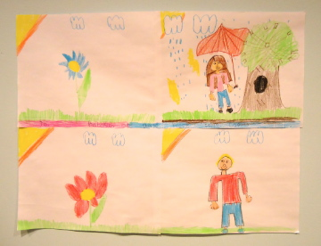 Recently David was involved in an intense discussion about NJ history with his eight year old client who was preparing an oral presentation for her 3rd grade class. She was seated in a cheerfully painted child size Guatemalan chair. Her spine had begun to curve sideways which is referred to in medical terms as scoliosis. Scoliosis often presents as children approach puberty, and can be accelerated by the rapid growth that occurs during that part of their development. Scoliosis can create stress in the psychological and physical aspects of a child’s life. While it often is small, and does not progress to be a problem, it should be watched and treated as a preventative for future problems.

As the discussion touched upon New Jerseys nickname ” The Garden State”, David used his hand to gently nudge the soft tissues adjacent to his patients’ spine causing them to ease and lengthen. The child began to absorb the message that David had tactfully communicated to her spine. Her mind was still on the “ The Garden State” but there was an observable shift in her demeanor. A large breath, brightening of the eyes and a new burst of enthusiasm followed as she asked David if he knew whom the current governor is.

David has been Rolfing babies and children since 1986.  His early days as a pediatric physical therapist were spent in special education settings for children with developmental disabilities. David discovered early in his career the powerful effect that Structural Integration can have for children with  Cerebral Palsy, scoliosis, pigeon toes, knock knees, developmental delays, sports injuries and other common problems. Noninvasive, yet quietly profound was the impact noted as he continued to Rolf children through the years.

Due to the malleability of the young body a small amount of input can help a child to grow with greater comfort, body awareness and structural balance. As Rolfing takes the stress out of their bodies’ children can be more themselves, more relaxed in their own skin. David has treated children with profound disabilities as well as those with moderate to mild challenges.

Children quickly learn that receiving work from David is not a hardship. He engages them with conversation and play using their natural movement as a resource for getting the job done. Since children change quickly they do not require deep pressure rendering the experience painless.

What they stand to gain are improvements in posture, gait, mobility and alignment.  These changes can have a wonderful impact on the progress a child makes in their journey through life.