Men seek acupuncture treatment for a variety of ailments, but it is rare that a man will present himself at my office and announce that he is suffering from erectile dysfunction (ED). During the course of an initial evaluation it is not unusual for us to learn that a new patient is silently suffering from this problem. ED is often taken for granted. It is commonly assumed that impotence is an unavoidable artifact of the stresses of modern life or a normal aspect of aging. 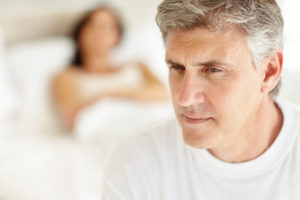 chemicals norepinephrine, serotonin, oxytocin, vasopressin, nitric oxide and prolactin are released into the brain. This cocktail creates a sense of wellbeing and deep relaxation. Overall stress is reduced.

Erectile dysfunction (ED) or impotence is defined as the inability for a man to maintain an erection of the penis long enough for his own sexual satisfaction and the satisfaction of his partner. Over 30 million American men suffer from chronic ED. Almost all men experience transient ED.

For older men vascular causes are most common. For younger men, psychological issues are often the undermining cause.

These are some of the causes of erectile dysfunction

Men with ED have often have reduced energy and blood flow to the lower pelvis. This can put a damper on sexual excitation. As acupuncture restores the flow of energy in the body, the blood flow to the testes and penis improves.

Acupuncture facilitates the bodies innate ability to detoxify and release the by products of medications and alcohol that can hinder healthy sexual function.

Acupuncture supports the immune system to strengthen, creating an opportunity for prostate enlargement to resolve. Acupuncture helps to establish hormonal balance. Testosterone levels, sperm production and erectile function are influenced by acupuncture. Acupuncture is a helpful aid for anyone participating in a weight loss program. As body weight becomes normalized healthy sexual activity is often reclaimed. Acupuncture mitigates the effects that stress has on the body while alleviating anxiety and depression.

Impotence puts a dent in men’s vitality, happiness and feelings of wellbeing and should not be ignored! This is the first of a series of articles on men’s sexual health.