Sam, a 13 month old was alert and cheerful when his parents brought him in to me for treatment. His eyes were bright and he was quick to warm with a smile. His parents were concerned because he had been diagnosed with Cerebral Palsy (CP) and he had significant developmental delays. 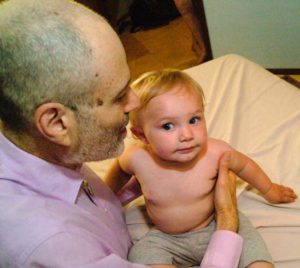 Sam was having trouble propping on his elbows. His right arm and leg supported him nicely but his left side did not. Sam’s left shoulder, elbow and hand were unusually tight due to muscle spasticity. This was also true of his left hip, knee and foot. These limitations were delaying Sam’s development – he wasn’t able to creep, crawl, sit or pull to stand as would be expected at his age.

Sam’s Cerebral Palsy was caused by a brain injury at birth that caused his muscles to be chronically tight (spasticity.) The spasticity created multiple problems that limited Sam’s mobility, particularly on the left side of his body.

Sam’s parents were particularly concerned as he was already receiving physical, occupational and speech therapy and his progress to date had been minimal.

I began with a structural analysis and found Sam had a profound loss of mobility in his left arm and leg. For example, Sam’s hip joint did not fully flex, extend or adduct due spasticity and myofascial shortening.

Rolfing can  be unusually helpful for people with spasticity. While the underlying neurologic problem may persist, Rolfing can lengthen the myofascial span and often restore mobility and function.

Rolfing is an intimate experience where the Rolfer’s touch can open up restrictions in the soft tissue. David worked closely with Sam, always respecting Sam’s tolerance for change. Sam came for weekly Rolfing sessions over an eight-month period.

After four months of Rolfing, Sam’s was able to prop on both arms, creep and attain quadruped. Upon completion of his Rolfing series he was crawling, sitting and pull himself up into a standing position.

The synergy of Rolfing and traditional therapies was a winning combination for Sam and for many children with developmental delays. Sam’s family shared these words:

“David’s amazing experience both as a Rolfer and a classic physical therapist along with his wonderful personality are a gift. We are absolutely convinced that our son’s amazing progress has certainly roots in David’s therapies.”

Read more about the experience of Sam and other patients here.